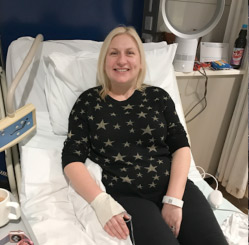 youngest daughter wouldn't kiss her for fear of catching the disease has become one of the first in the world to take part in a groundbreaking first-in-human cancer study at Weston Park Hospital.

Amanda Horsman, 43, of Warmsworth, Doncaster was told she had an advanced head and neck cancer just days before Christmas 2016, but decided to keep the news of her diagnosis hidden from her three young children, Franchesca 10, Kristian 9, and Holly 6, until the new year.

Now she has become one of only 20 people in the world and one of only three in Sheffield to have taken part in a cutting-edge clinical trial looking to see if a new drug known as MTL-005 can affect chemotherapy by making cancerous tumour cells more sensitive to radiation therapy.

The trial, which involves patients receiving a one-off dose of the drug a week before chemotherapy, was brought to Weston Park Hospital thanks to its leading research facilities and the expertise of cancer clinicians and research staff.

Amanda, who first noticed a lump in the left-hand side of her neck but had believed it was a cyst, says taking part in the Morex trial was her way “of making something positive out of something so negative”.

“I wasn’t in any pain, but mentally it was different. If someone said you were going to hell, you wouldn’t believe it, but that’s what living with cancer is like. I just thought ‘what have I done wrong?’, but I just had to come to terms with it. Taking part in the trial was my way of doing something to help the next generation and the generation after that. It felt so positive.”

“I couldn’t change what I had been told, but I didn’t want to ruin their Christmas,” the busy mum-of-three said.

However, taking part in the first-in-human study gave her renewed hope.

“I thought research from the trial will help people having treatments now, so I immediately said ‘yes’, and if no-one got involved there would be no way we could help others get treatment quicker or support people through the last months of their life.

On the advice of Dr Bernie Foran, her consultant oncologist at Weston Park Hospital, Amanda took the information about the trial home to make sure she fully understood what would happen to her during the clinical trial, and the drug was subsequently given to her in a one-off dose over two days in early February 2017. A week later her radiotherapy treatment began.

“My eldest was in tears and my youngest just didn’t understand,” added Amanda who has now returned to work as a full-time union convenor, “She thought she would catch it if she kissed me. It was the hardest thing I’ve ever had to deal with.”

Her treatment ended in March 2017, and she was “ecstatic” to be finally given the all-clear in autumn last year.

“Weston Park Hospital is an amazing place – from the lady cleaning the floor to the nurse or consultant, everyone’s been outstanding. Nobody ever made me feel like I was asking a daft question, or wasting their time. Everything about the trial was really positive, and now my youngest tells everyone ‘my mum beat cancer!’”

Dr Bernie Foran, who has been working with a team of research colleagues from Glasgow and London to bring the Morex trial to Sheffield, said that the first-in-human study had resulted in even more innovative treatments being brought to the region’s specialist cancer hospital: “Weston Park Hospital is one of only four specialist cancer hospital in the UK, and thanks to our status as a centre of research excellence we have been able to bring even more innovative treatments to clinical settings, including two or three more first-in-human studies, with more now planned in the pipeline.

“Not only is this great news for those who want to take part in cancer research, but published evidence shows that this is good news all-round for patients with head and neck cancers as research-active centres improve the quality of cancer services across the board and result in better outcomes for all patients, not just those taking part in clinical trials.”

To thank the team, Amanda is now trying to raise £10,000 for Weston Park Cancer Charity, and is staging several events, including a charity ball on the 23 June and a sponsored family fun evening walk at the end of September which is to be held around Doncaster Rovers football ground.

To find out more about getting involved in clinical research at Sheffield Teaching Hospitals NHS Foundation Trust email getinvolved@sth.nhs.uk or contact 0114 226 5935.